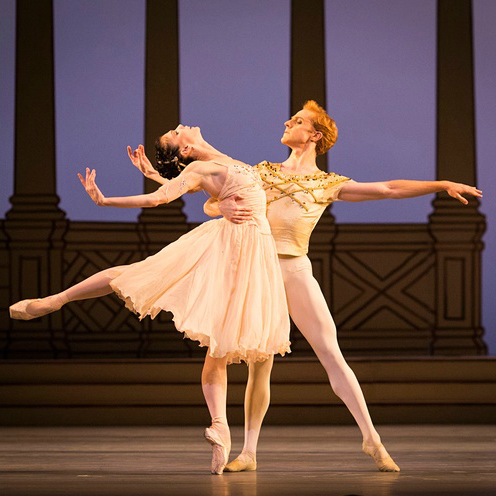 The Royal Ballet’s 2016 revival of Sir Frederick Ashton’s 1980 Rhapsody is a sheer delight in all ways.  Paired with a 2015 revival of Ashton’s 1961 The Two Pigeons, Rhapsody offers the audience a mix of electric Russian style and Ashtonian English grace before delving into the heartbreaking romantic comedy of Pigeons.

Three couples lead the cast of Rhapsody this run – James Hay and Francesca Hayward, Steven McRae and Natalia Osipova and Valentino Zucchetti and Yuhui Choe.  Hay and Hayward led the opening cast at a Saturday matinée on January 16 and are the only English dancers performing the roles this run.

As stated in my opening night review, Hayward ‘found no problem in executing Ashton’s intricate maze of steps – skittering across the stage and making the endless quick footwork appear like butter melting against toast.’  Hay, though admirable in performance, is quickly tossed aside when put against McRae.

Fiery, striking and excessively charismatic, McRae gives Ashton’s lead male the Russian edge intended for it’s originator – Mikhail Baryshnikov.  McRae’s 540 turns (demonstrated here at around 0:05) left audience members gasping as he scratched through the air before whipping into yet another. His cheetah-like chaînés had the same effect.

He is partnered by Osipova on her return to the ROH Stage following yet another injury.  In Rhapsody, Osipova is, well, too Osipova.  Naturally, the fast footwork gives her no trouble, but it regrettably becomes meaningless as she spares no thought for the role.  While Hayward shows carefully placed lines, Osipova ignores them, her Russian training forcing flashy port de bras and arabesques that were either too high or too low.

On the contrary, Choe – the third cast lead female – is astounding.  Choe has already made her mark as one of the Royal’s leading Ashtonian dancers with stunning portrayals in his Cinderella, Fille and, most recently, Pigeons.  Here, she is royal – demonstrating a sophisticated use of upper body atop fast-paced feet.  For all her grace and musicality though, Zucchetti falls short.  His jumps are incredible, most certainly, but his need to prove this time and time again during the 30-minute piece results in him falling behind the music.  His pirouettes never seemed to end well, the final ones always leaving him hopping round to face the audience.

That said, his charisma, though different to McRae’s, is well-suited to the role.  Hay could learn a thing or two from his peers in this regard and push his English training to the back burner for this particular ballet.  As for the females, Hayward is technically impeccable, Choe has a firmer sense of the role’s meaning, but Osipova is far too effervescent throughout, almost afraid to let go of her inner Kitri.

Rhapsody runs until Saturday January 30, 2016.  Hayward and Hay perform in the final performance, Zucchetti and Choe perform once more on the 28th and McRae and Osipova will lead the live cinema relay on Tuesday 26th.

For tickets and further details please visit the website of the Royal Opera House.